skip to main | skip to sidebar

Posted by Arlington View at 2:09 PM No comments:

Arlington and Fairfax counties are teaming up to gather public comment on an analysis of alternatives to building a streetcar line on Columbia Pike.  An Alternative Analysis/Environmental Analysis (AA/EA) was performed as part of the Columbia Pike Transit Initiative, which addresses transit along the five mile corridor from the Pentagon City area to the Skyline area in Fairfax. It's the plan that includes the controversial streetcar system, now believed to cost between $242 million and $261 million.

The AA/EA looked at four alternatives and analyzed how each would satisfy the community's need for improved transit, and how each would affect the environment. One of the options was a "No Build Alternative," which is designed to provide a baseline comparison to the other ideas. Two of the other plans involve beefing up bus operations, and the final is the streetcar option.

Arlington and Fairfax had to devise the AA/EA in order to qualify for federal funding, per the Federal Transit Administration. The documents are available for review on the Columbia Pike Transit Initiative website, and comments can be left there as well. Comments can also be sent to info@piketransit.com.

Public input will be accepted through Thursday, June 21. In addition to providing comments online, there will be an informational public meeting at 7:00 p.m. on Wednesday, June 6, at Patrick Henry Elementary School (701 S. Highland Street), where feedback will also be accepted.

Posted by Arlington View at 12:33 PM No comments:

Notice of Meeting on on Thursday, May 24: Columbia Pike Neighborhoods Plan

Dear Neighbors,
Arlington County Planning staff has committed to provide the neighborhood with a briefing on the Draft Columbia Pike Neighborhoods Plan, a component of the currently underway Land Use and Housing Study.  The results of this study could include recommendations to the County Board concerning potential changes to land use in the Arlington View neighborhood.
The meeting is scheduled for Thursday, May 24, 2012, from 7-9 at the Hoffman-Boston school.  It will be an opportunity for you to get informed, express your views, and possibly influence outcomes.
The program on the 24th will include time to have questions answered by County staff.  Please review the information below, and at the link provided below to the relevant Arlington County web-site.  If you have any questions you would like answered by County staff, please email them to me by this Friday and I will compile them to help ensure efficient use of time on the 24th.
Please ask as many questions as you would like, but limit each question to one issue of no more than one or two sentences.
Finally, please share this notice with others, AND please plan to attend this important meeting.
Best regards, and looking forward to your participation.
Tom

Please forward/communicate this important information your neighbors if not part of this email list.
Dear Neighbors,
I urge you to visit the following Arlington County website to get informed on matters that could soon affect Arlington View:
http://www.columbiapikeva.us/revitalization-story/columbia-pike-land-use-housing-study/
If you are short on time, in particular you should review pages 1.4,  3.4-5,   3.16,   and    4.19-21 of the  Draft Neighborhoods Plan on that page.
A possible decision by the County on these matters could be taken as early as July (see further below).
If you are interested in follow-up information, please reply to this email and I will put you on a list for further information.
A little background:
"The Columbia Pike Form Based Code (FBC) was adopted in 2003.  It is a redevelopment tool intended to implement the first revitalization plan for Columbia Pike (Columbia Pike Initiative Plan) that set careful and clear controls on building form to shape good public space.  The FBC only applies to the commercial centers on the Pike. The Land Use and Housing Study is looking at the residential areas. If it helps meet the stated community goals, a tool similar to the FBC may be adopted at the end of the Study for the residential areas" (emphasis added).
The hi-lited part of the above County description of the Land Use and Housing Study is what is being considered at this time.  It would for example, allow more intensive development of some properties in the Arlington View neighborhood.
The purpose of this email is not to express a view on the possibility of a change to the land-use in our neighborhood (pro or con), but rather to ensure that the Arlington View Community is informed, and has the opportunity to participate and provide appropriate input to a process that could materially affect our community.
Best regards, and looking forward to your participation.
Tom
Recent communication from the County
********************
We thank you, community members, for taking the time to submit comments and request changes to the April 6, 2012 Draft Columbia Pike Neighborhoods Plan.
I am writing to let you know that we are extending the study period by one month.  As outlined below, this is so that staff and the study Working Group can have more time to review and incorporate the feedback we have received into a revised draft.  We are updating our schedule and this additional time will result with a request for advertisement of the revised plan in June 2012 with final consideration and adoption at the Board meeting in July 2012.
Currently, we are:
·         Still receiving comments/concerns from the community.
·         Working with the Columbia Pike Working Group to discuss the comments and revise the Plan documents.
·         Continuing to brief advisory commissions and obtain their input.
The additional study time will allow us to fully consider the comments we have received and to develop stronger, more clear and robust recommendations for some critical elements that, we hope, will reach the Plan's goals and objectives.  This schedule and the associated new milestone dates are posted on the study website.
We appreciate your patience and we thank you for being part of this process.
View the Draft Columbia Pike Neighborhoods Plan here:
http://www.columbiapikeva.us/revitalization-story/columbia-pike-land-use-housing-study/
Jennifer Smith
Principal Planner, Columbia Pike Initiative Coordinator
DEPARTMENT OF COMMUNITY PLANNING, HOUSING & DEVELOPMENT
Planning Division
2100 Clarendon Blvd., Suite 700
Arlington, VA 22201
703 228-3525 (Main) | 703 228-0068 (Direct)
jsmith3@arlingtonva.us | www.arlingtonva.us | www.columbiapikeva.us
All correspondence sent to and from Arlington County Government is
subject to the public record laws of the Commonwealth of Virginia.

Posted by Arlington View at 1:27 PM No comments: 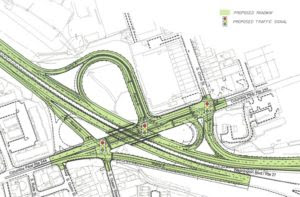 "On Tuesday, May 15, crews will close a lane in each direction from 9 p.m. until 5 a.m. between I-395 and the entrance to Fort Myer," the press release said. "Beginning at midnight, crews will also stop traffic for up to 30 minutes at a time on southbound Washington Boulevard just prior to the ramp to Columbia Pike to remove an overhead sign structure. Drivers should use an alternate route on this night if possible."
The Washington Boulevard bridge carries more than 80,000 vehicles over Columbia Pike every day, according to VDOT.
In addition to the closures on Washington Boulevard, Columbia Pike will be completely closed up to five weekends per year to allow for bridge demolition and other work.
"These closures will begin after rush hour Friday evening and reopen by rush hour on Monday morning," VDOT said. "Traffic will be rerouted between S. Quinn Street and S. Orme Street around the north side of the intersection. Message signs will notify motorists of these closures in advance."

Posted by Arlington View at 1:26 PM No comments:

Letter Carrier Food Drive is SATURDAY! Please leave a non-perishable item by your mailbox by 9:00 a.m. on SATURDAY, MAY 12 and your letter carrier will collect it and bring it to AFAC (Arlington Food Assistance Center). This is an easy way to help our neighbors in need. Suggested items include: canned tuna, low-sugar cereal, low-sodium soup, rice, pasta, and peanut butter. No glass jars, please.

Posted by Arlington View at 2:48 PM No comments:

Posted by Arlington View at 1:53 PM No comments:

Posted by Arlington View at 4:28 PM No comments:

The Washington DC premiere of FISHING WITHOUT NETS, a film about Somali pirates told from the perspective of the pirates.

The film was awarded the Grand Jury Prize in Short Filmmaking at the 2012 Sundance Film Festival.

There will be a Q&A with director Cutter Hodierne (HBW 2005) and producers John Hibey and Raphael Swann (HBW 2005),
as well as a panel on 'Somali Piracy' featuring experts on the subject.

After party immediately following the screening.

A portion of the proceeds benefit 'Film Aid', a humanitarian aid organization that uses film and video to entertain and to educate refugees around the world (FilmAid.org).

After the screening and Q&A there will be a party to celebrate the Washington, DC premiere at Bus Boys and Poets on 14th Street NW!

Posted by Arlington View at 7:12 AM No comments: